The Gospel According to Mark (Part 3 of 5)

This week we’re looking Act 2 of the Gospel According to Mark, which covers Mark 8:27-10:52. The approach we’re taking to this study breaks Mark down into 3 Acts. You can find a helpful 10 minute video summary of the whole Gospel and poster summarizing the 3 Acts in Part 1 of our study. 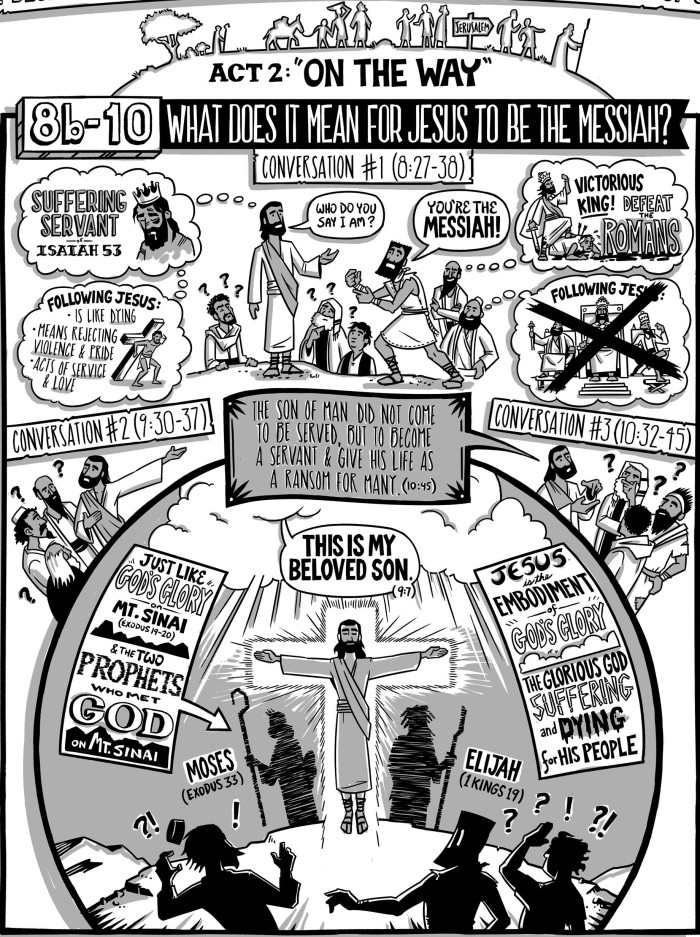 The second part of Mark’s Gospel moves from announcing Jesus’ as the promised Messiah or King, to showing showing that Jesus is a very different kind of king. Jesus begins his journey to Jerusalem and over three conversations tells his disciples that he will become king by suffering, dying and rising again. This shakes the group the core, and they struggle with what Jesus is saying throughout this section. In fact Act 2 can be seen as a journey from one blind man (in Mark 8:22-26) to another (in 10:46-52). The first story prepares us for the struggle of the disciples to see and understand. The second affirms that in spite of their difficulties and failures in Act 2, by the end of Act 3 they will see, understand and faithfully follow Jesus on the Way.

In the region of Caesarea Philippi, which was home to a temple to the Divine Emperor of the Rome, Jesus asks his disciples who they think he is. Simon Peter confesses that Jesus is the Messiah, perhaps hoping that this is the first step toward Jesus toppling that false god and freeing Israel from Roman rule. Instead Jesus tells Peter and the others that he will be rejected by Israel’s leaders, be killed and after 3 days rise again. Peter is stunned and challenges him, before being put in his place for presenting Jesus with a dangerous temptation.

Jesus then tells the disciples and the crowd that anyone who follows him must follow his example by denying themselves and taking up a cross of their own. The mark of Jesus’ followers will be sacrificing their lives for him and his good news, which will end up being their path to true life. Jesus also warns of the danger of denying him, while presenting the hope that some the people following him in Galilee will see God’s Kingdom come with power. This has been a confusing prophecy for many, but refers to Jesus’ Resurrection and the resulting empowerment of his disciples to extend God’s Kingdom throughout the world.

The Mountain and Valley: The Transfiguration (Mark 9:2-29)

Peter, James and John get a sneak preview of the Resurrection when Jesus takes them up a mountain to reveal his true glory. Jesus is transformed and joined on the mountain by the prophets Moses and Elijah, who had also seen God’s glory on a mountain top. As he has before, God speaks from a cloud, only this time he confirms that Jesus is his Son, and that the must “Listen to him!” The three are then sworn to keep this event to themselves until after Jesus is raised, something that continues to confuse them.

When they get down to the bottom of the mountain, they see another scene inspired by the Old Testament. Just as Moses found chaos and unfaithfulness when he came down the mountain, so too does Jesus. The other disciples are arguing with some Pharisees after they were unable to heal a boy with life threatening seizures. Jesus is deeply frustrated, but shows compassion to the boy’s father who cries out, “I believe! Help my unbelief!” The boy is healed and freed from the spirit causing his illness, and the disciples wonder why they couldn’t cast it out when they had been able to heal in Jesus’ name before. Jesus says the answer is to spend more time in prayer. Only then will they have the faith they need to handle more difficult tasks.

Jesus announces his coming suffering a second time, and for a second time has to challenge the disciples on what this means for following him. The disciples make the mistake of arguing about who is first when Jesus has just spoken about putting himself last. He welcomes a child into their midst and tells them the measure of those who are first is in how they welcome and care for those who are least and last in the world.

But John can’t contain himself. Wanting Jesus to affirm that the disciples are first into the Kingdom, he tries to get Jesus to approve their attempt to shut down another exorcist who was using Jesus name. But Jesus is bigger than the company of his followers, and calls on them to welcome anyone who shows love and reverence for Jesus, for “Whoever is not against us is for us.” Bottom line: the company of Jesus’ followers have an essential role in his mission, but they are not the gatekeepers to Jesus.

In fact, if you’re going to be first in Jesus’ Kingdom and his mission you have an incredible responsibility. His disciples must always be an open door to him, never a stumbling block for the little ones who love and trust in him. If you cause others to stumble you’re better off being thrown into the sea. Therefore disciples need to cut everything out of their lives that might make them a barrier to others coming to Jesus. That includes stupid arguments about who is most important.

Mark then provides a few stories that provide concrete examples of what following the crucified King looks like in day to day life. First some Pharisees debate Jesus over the question of divorce. Jesus replies they are asking the wrong question, and taking divorce too lightly. Moses allowed divorce on account of human weakness, but God’s intention from the beginning was for marriage to be a lifelong relationship. Divorce then is a serious thing, not to be undertaken lightly or seen as morally indifferent (in fact remarriage after divorce is technically adultery). This was radical teaching in a time where many men would divorce their wives for trivial reasons and leave them destitute. Instead, followers of Jesus should be marked by faithfulness, even when the road gets hard. Divorce is a concession to human frailty, but comes at a high personal cost and should always be a last resort.

From marriage, Mark takes us to a story about children. The disciples try to stop people from bringing their children to be blessed by Jesus and get a sharp rebuke in return:  “Let the little children come to me; do not stop them; for it is to such as these that the kingdom of God belongs. Truly I tell you, whoever does not receive the kingdom of God as a little child will never enter it.”

Then along comes someone the disciples would love to see join Jesus’ movement: a right-living rich man. But as much as Jesus loves this man, he sees that the man’s wealth will be an obstacle to him taking up his cross and following. Jesus challenges the man to give it all away and the man walks away sadly. The disciples are shocked because it was often assumed that wealth was a sign of God’s favour (and still is). Instead, Jesus teaches that wealth is barrier to following him – it’s hard to deny yourself when you have everything. But in the end no one can get right with God by their own efforts, we’re saved and welcomed by God’s grace alone. And if we give up our possessions and even our loved ones we’ll find we get them back in a new a deeper way, though not without the challenges that come from following Jesus in this world.

As the group nears Jerusalem, Jesus turns on last time and announces what’s to come. Once again the disciples show their blindness. James and John come forward to ask for the number one and two positions when he becomes King. Jesus asks if they can do what’s necessary to be first in his Kingdom and they say, “Absolutely!” Jesus prophecies that they will (indeed both will suffer for Jesus and at least one will die a martyr – Acts 12:1-12), but that the places on the right and left of his throne are already spoken for. Indeed, when we fast forward to chapter 15 we see that Jesus’ throne is the cross, and it will be two bandits beside him in his moment of shocking glory.

Jesus then reminds the rest of the disciples (who are naturally grumpy about the brothers’ arrogance) that to be first in his kingdom you have to be last, and if you want be great you must be a servant and slave of all, “For the Son of Man came not to be served but to serve, and to give his life a ransom for many.” This is a key saying, because Jesus is pointing to the prophecy he will fulfill by his death and resurrection: the Suffering Servant foretold in Isaiah 52:13-52:13.

As Jesus leaves Jericho (the last stop before Jerusalem) a blind man named Bartimaeus cries out for help:  “Jesus, Son of David, have mercy on me!” Even though the crowd tries to silence him, Bartimaeus continues to cry out and Jesus hears and heals him. Jesus tells him that his faith has allowed him to see and be well. Bartimaeus then follows Jesus “on the Way.” This is a significant turn of phrase because early Christians referred to themselves as “The Way.” Like Bartimaeus, Jesus’ disciples will now finally find faith and sight, and they will learn how to faitfully walk in Jesus’ Way. It won’t be an easy journey, but they and we can walk it because the Son of David has shown us his mercy and walked the Way ahead of us – as we’ll see in the closing two sessions of this study.