One of the main goals for the sessions of this study is to define what is a good life, or is ‘the good life.’ The study guide* I’ve based this on uses the Biblical word ‘abundance,’ or ‘the abundant life’ to talk about this good life. This is taken from Jesus’ teaching in chapter 10 of the Gospel of John where he says: “I came that they may have life, and have it abundantly.” (John 10:10 NRSV)* 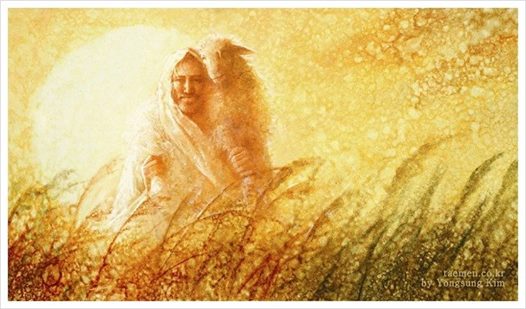 The best place to start thinking about this is in John 10:10-11, where Jesus speaks of himself as the Good Shepherd. Take a few minutes to read and reflect on this passage.

In this passage Jesus uses the image of the shepherd that was well known and loved by the people of Israel. Their earliest ancestors had all been nomadic shepherds and that shaped their identity as a nation. God was understood as a shepherd, as were the leaders of the nation – kings, priests and prophets. Over the generations those who misled or misruled the people were condemned as false shepherds. Part of the hope for the Messiah or Christ was that he would be Israel’s true Shepherd, who would lead the people back to God, being faithful to God and to them.

Middle Eastern shepherds are quite different from those in Europe and other parts of the world. They don’t use dogs or herd the sheep from behind, but as Jesus describes in this passage, they go ahead of the sheep and lead them with the sound of their voice. The sheep actually know the voice of their shepherd and will run from strangers. The shepherd will often lie across the entrance of the sheepfold at night, and will also quite literally be ‘the gate’ for the sheep as Jesus says in verse 7.

Now while this passage can help us start to get an idea of what abundance means from a Biblical perspective, we also need to look at how the world around us understands it today. According to one edition of Webster’s dictionary there are at least two common meanings, the first meaning is ‘very plentiful; more than sufficient; ample.’ But the second meaning of the word abundant is ‘well-supplied; rich (in something),’ beyond ‘enough’ or ‘ample’ and leaning towards ‘excess.’ Here we can see some tensions in the idea of the abundant life. According to the first definition, abundant is synonymous with ‘ample’ Yet according to the second, the word abundant means to be ‘rich in something.’ Thus abundant seems to contain a sliding scale of meaning from ‘adequate’ to ‘having more than enough.’ In other words, the definition of abundant changes depending on our perspective.

Perspective also affects our sense of what abundant life means. There are different perspectives on what makes up abundant living or “the good life.” Today it increasingly means material possessions and wealth, as well as having a good career, being successful, accomplished, and even famous – Facebook and other social media play into this as people compete with others in a game of who has the best life (or can look like they have the best life). This even comes down to who has the best family, who is the best parent, has the most accomplished kids etc. – There is a desire to have it all, and have it more than others. At the same time the more subtle good things in life have gone down in value (the stuff that can’t easily be boasted about online) faith, spirituality, personal growth and development, and seeking to bring the good the beautiful and just into the world.

Our sense of what is enough, or is abundant also changes based on our place in life, society and the world. For example people’s notion of enough, and what they need verses what they want, has changed dramatically in the past 60 to 70 years. It generally takes more stuff to feel satisfied (who in Canada can imagine a good life without a TV, computer, car, washer and dryer these days). This is especially true of many younger people used to these things who want to start off where their parents are now, not where they started from when they were young.

Take some time to reflect on some or all of these questions:

One vision the Bible provides of the good life, and of the world being in balance with everyone having enough is of the Jubilee. When Jesus announces the fulfillment of the prophecy of Isaiah in his life and ministry in Luke 4:16-21, he announces that his arrival brings about the ‘year of the Lord’s favour.’ Here Jesus speaks of the Biblical year of Jubilee found in Leviticus 25.

This was probably an ideal that was never fully put into practice but the idea was a simple one. Every 50 years the people of the nation would rest, the land would rest, and everyone would return to their ancestral land (even if they had sold it to someone else), all debts would be cancelled, and all slaves would be set free. It was a Sabbath of Sabbaths, a time of rest, a time when the reset button would be pressed and everyone would get a more or less fresh start. The rich wouldn’t keep on accumulating forever, and the poor would have hope that they could catch up and start again from a more level playing field.

Read through Leviticus 25. What sounds appealing in this vision of a good life for all? What is challenging to you?

*Abundance: Living Responsibly with God’s Gifts by John W. Peterson published by Abingdon Press in 2001. This session is based on p.19-26.

*Translations that derive from the King James Version (RSV, ESV, NASB, NRSV) tend to use some version of the word ‘abundantly.’ Other modern translations like the NIV translate as ‘life to the full’ or ‘rich and satisfying life’ (NLT). The Greek term is περισσός which means ‘a quantity so abundant as to be considerably more than what one would expect or anticipate.’ New Testament scholar N. T. Wright translates it as ‘full to overflowing.’