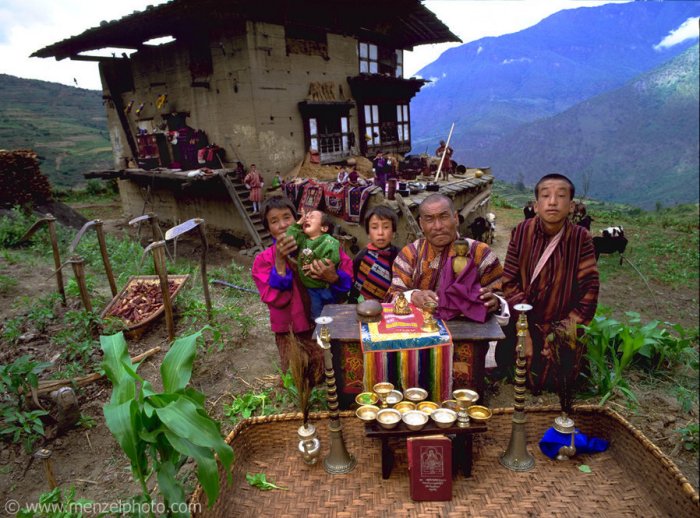 We live in a world of dramatic contrasts. In 1993 Peter Menzel photographed 30 families from around the world together with their house and all their possessions. The photo above is one of two from the cover of the book he published, “Material World: A Global Family Portrait.” It is of a family from Bhutan. What you see is the extent of their worldly possessions. The contrasting photo on the cover is of the family from Texas found below. You can find the whole collection of photos here: http://menzelphoto.photoshelter.com/gallery-collection/Material-World-A-Global-Family-Portrait-by-Country/C0000d0DI3dBy4mQ 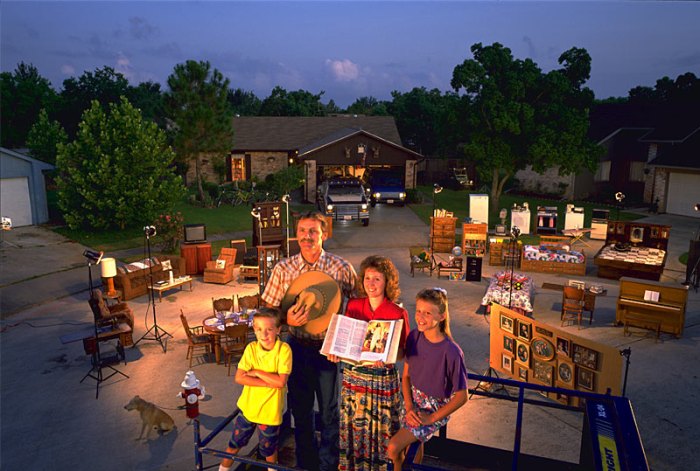 Images like this can help those of us in Canada and other developed Western nations gain some perspective on just how much stuff we have. Another good way to get this perspective is to move. My wife and I just sold our house this past Sunday, and to do so we did a radical de-cluttering of our house. In doing so we were taken aback at just how much stuff we had accumulated in just the six years since we moved into our modest three bedroom duplex from the one bedroom apartment we had lived in for the first three years of our marriage.

The reality is that as modern Western people we have more material wealth than any society in the history of the world. But we’re also working more to have it (it normally takes two incomes to support at middle class lifestyle today), and we constantly feel pressured for time, are burdened down with stress, and study after study shows having more is not making us happier.

We also have numerous warnings about the dangers associated with wealth from Jesus and the prophets of the Bible. In particular for those who try to follow Jesus, and devote themselves to God comes the warning of  Matthew 6:19-21 & 24

19 “Do not store up for yourselves treasures on earth, where moth and rust consume and where thieves break in and steal; 20 but store up for yourselves treasures in heaven, where neither moth nor rust consumes and where thieves do not break in and steal. 21 For where your treasure is, there your heart will be also…  24 “No one can serve two masters; for a slave will either hate the one and love the other, or be devoted to the one and despise the other. You cannot serve God and wealth.

One of the calls from God through the Scriptures is to reorient our lives from the constant pursuit of wealth and material things by setting apart a day to do no work, a day to rest and put our focus on God. The Scriptures call this Sabbath. God has given us the gift of Sabbath so that his people can both have the rest that they need to be healthy and space to keep God central in their lives

Read and reflect on these passages that deal with the Sabbath:

Strict Sunday Sabbath keeping was long part of the Presbyterian tradition, both back in Scotland and here in Canada. William Caven, an early principle of Knox College, was known to walk miles to church on Sundays so that we wouldn’t be the cause of someone else working on the Sabbath. In the late 19th Century Canadian Presbyterians and other Christians concerned about the growing pressure (and desire) to work on the Sabbath formed the Lord’s Day Alliance. The Alliance together with Labour Unions successfully campaigned for laws that made Sunday a day of rest across Canada. In Ontario this Lord’s Day Act was struck down in 1985 and since then we have rapidly drifted into a 7-day a week way of life. Today few Presbyterians remember the central place that Sabbath keeping had in our practice of the Christian faith (a practice that admittedly was often dour and legalistic).

What might taking a full day of Sabbath look like for followers of Jesus today (keeping in mind both the Old Testament practice and Jesus’ teaching about a life-giving approach to Sabbath)? What sacrifices would we have to make? What benefit might we derive from listening to what God has spoken through the scriptures, and taking time to stop, rest and rejoice in his goodness? How would this set us apart from our neighbours?

Another key practice that has been taken up by Christians down the centuries is that that of Simplicity. This is inspired in part by Jesus radical call to the rich man in Mark 10:17-31 to sell all is possessions and the teaching he gave to his disciples after the man left grieving (yet notice that Jesus spoke these words out of love for this serious young man). Some Christians down the years have chosen to literally do what Jesus told the rich man, such as St. Anthony of Egypt the founder of Christian Monasticism, and St. Francis of Assisi.

But alongside this most extreme of callings, many more Christians have been inspired by the example of the first Christian Church found in Acts 2:42-47 and Acts 4:32-37.

44 All who believed were together and had all things in common; 45 they would sell their possessions and goods and distribute the proceeds to all, as any had need. 46 Day by day, as they spent much time together in the temple, they broke bread at home and ate their food with glad and generous hearts, 47 praising God and having the goodwill of all the people. And day by day the Lord added to their number those who were being saved. (Acts 2:43–47)

Or if that is too abstract try this thought experiment: You are going to live in another country with a lower standard of living for the next year. Luckily you’ve been provided with a small house that has running water, electricity, two bedrooms, a kitchen and a bathroom. Even better it comes with some furnishings. A bed in each of the bedrooms, a small table with 4 chairs, a basic oven and refrigerator. Unfortunately you won’t have any money to buy anything else when you get there. Pick 5 items from your house that you cannot live without for the next year.